Design for Ground Improvement begins with a definition of the design goals, i.e. the permissible values for:

After selection of the ground improvement method, the designer should also be involved in setting up the Technical Specifications and in the Quality Control measures during execution of the works.

The following check list is useful when preparing the necessary information for ground improvement design. If all this information was available, the designer would most likely not have any further questions during the design phase. All this information is rarely ever available. The experienced designer has to make intelligent assumptions and prepare a design that can live with the uncertainties produced by the incomplete information. This is the art of ground improvement design. It requires many years of experience.

The experienced stone column designer starts with a soil mechanical model of the foundation and the soil.  Starting from this, a first estimate of necessary stone column grid spacings and column diameters in function of load, soil type and depth is made. 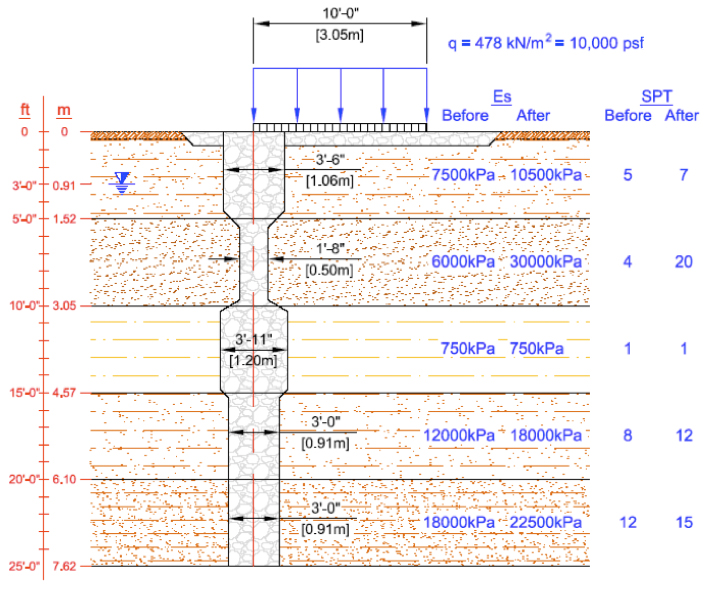 The above soil mechanical model can be entered into the program DC-Vibro of DC-Software GmbH as follows. 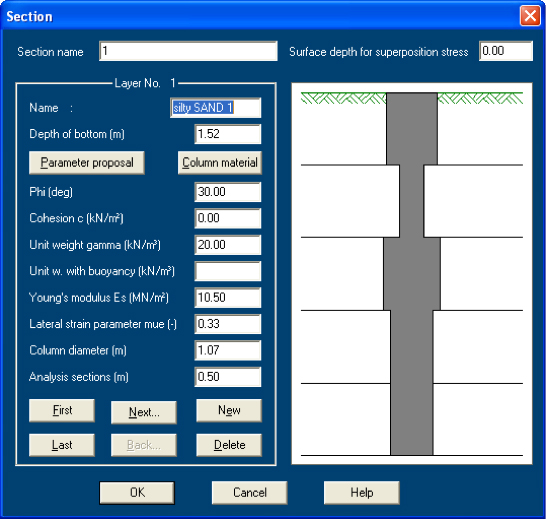 After input of soil parameters, column geometry and grid spacing, the program shows in an overview the input data. 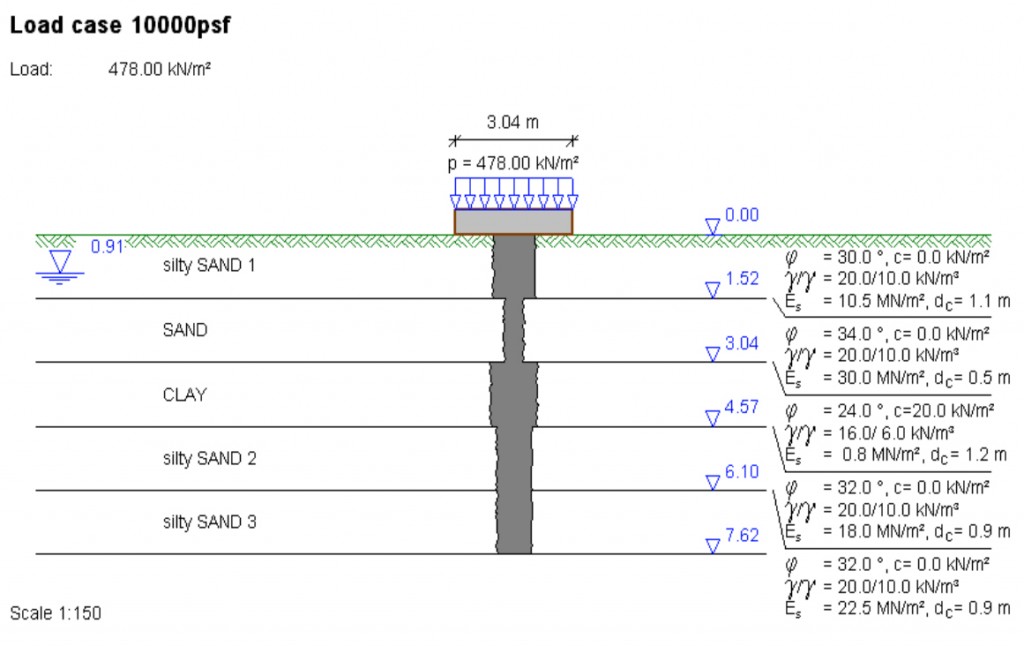 Then it calculates the resulting settlements with and without treatment.

In the below case settlements could be reduced from 243 mm without treatment to only 67 mm with treatment. 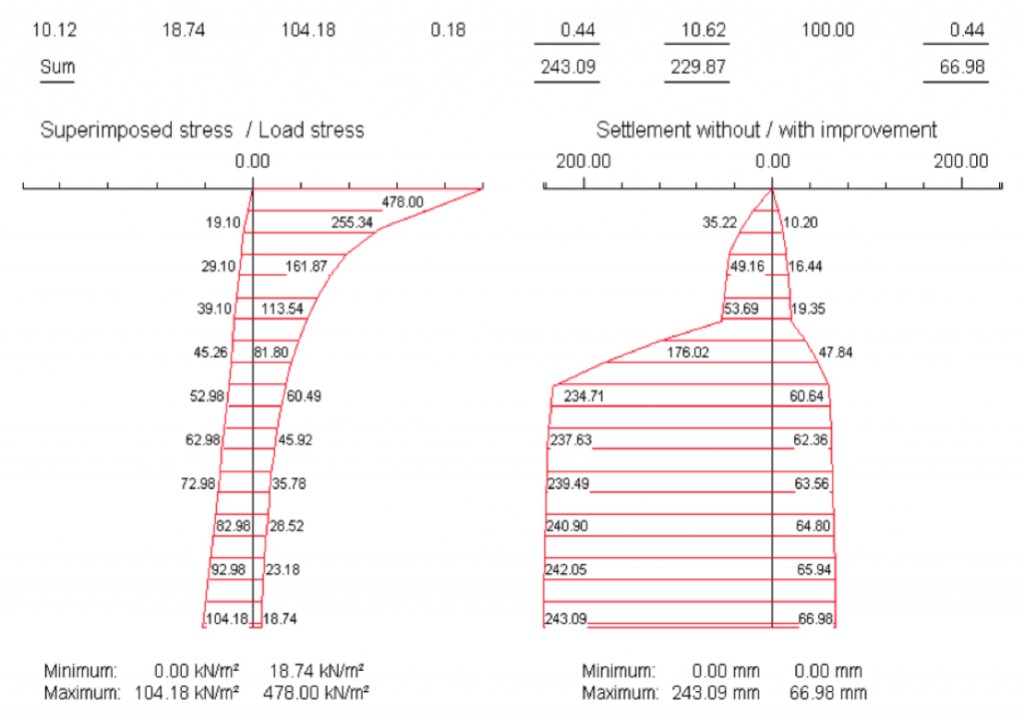 Stone Columns are best modeled with 3-dimensional simulation software, as the load bearing mechanisms between columns are evolving in a 3-dimensional way that does not easily lend itself always to a simplification in 2D.
The following output shows a load test simulated with such a 3D program (Plaxis3D).

It shows a footing with a group of stone columns at failure level. The outer columns are deforming more than the core columns and do this in a non-symmetrical way, away from the center of the footing.

Such deformation behavior cannot be predicted by simpler programs like DC-Vibro. However, as long as stresses stay safely below the failure level, such sideways deformation components are limited and the assumptions of DC-Vibro after Priebe are sufficient for the task of static settlement estimations. 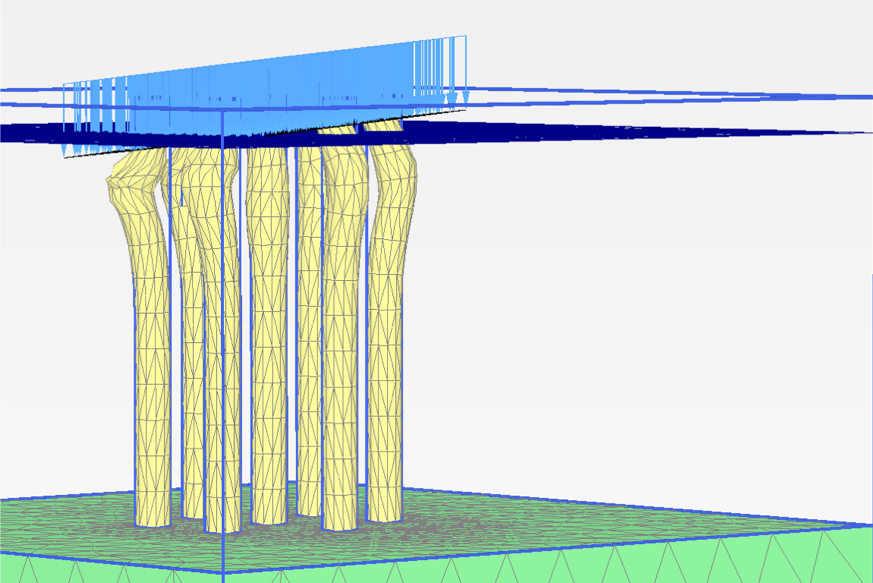 If a very well instrumented load test shall be back-calculated, a 3D Finite Element or Finite Difference simulation is most certainly the method to apply. Below a cross section through a 3D-model of a 5 m x 5 m load test plate is shown.The stress concentration into the columns in the soft (purple) layer is clearly visible as yellow to red lines.

Betterground Engineers utilize such software daily on projects around the world. This provides an advantage in experience both in soil modeling and computer simulation. In the end, however, it will aways be good engineering judgment based on many years of experience that influences the design decisions more than even the best simulations.